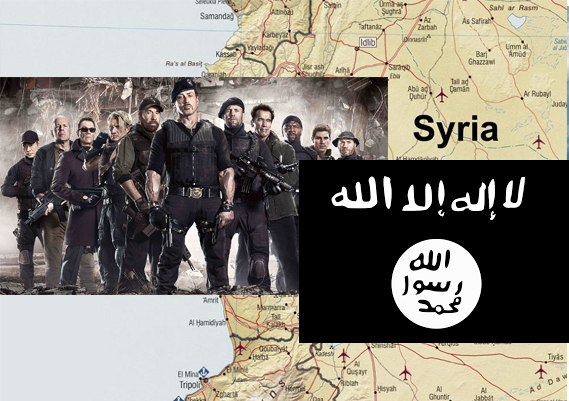 The group of elite mercenaries « The Expendables » are currently in a flight to Racca in Syria, according to US sources.

The reaction of the international community was not forthcoming following the numerous barbaric acts and the decision to send the elite group Expendables is finally an appropriate response to counter the advance of the Islamic State.

According to many people there, jihadists greatly fear the arrival of Chuck Norris, far more than the thousands of useless bombing previously operated by the coalition.

Each of the main members of the group launched a bad-ass quote before flying to Racca, the stronghold of the Islamic State. Chuck Norris: They gonna eat bacon with their ass. Sylvester Stalonne: Fuck god’s laws. I am the law.

Jason Statham: I performed with Luc Besson. Prepare my audi and I’ll smash them these assholes.

Harrison Ford: Hokey religions and ancient weapons are no match for a good blaster at your side, kid

Mel Gibson: The truth is that God hates me. Do as I do. Give him his change.

Antonio Banderas: I think my horse would lead this army better than you.

Jean-Claude Van Damme: I love peanuts. You drink a beer and you are tired of the taste. While you eat peanuts. Peanuts, it’s sweet and salty, strong and tender, like a woman. Eat peanuts. It’s a really strong feeling. And after you again want to drink a beer. Peanuts is the perpetual motion of man’s reach.

Tsunami ALERT :14 feet of snow tomorrow all over USA