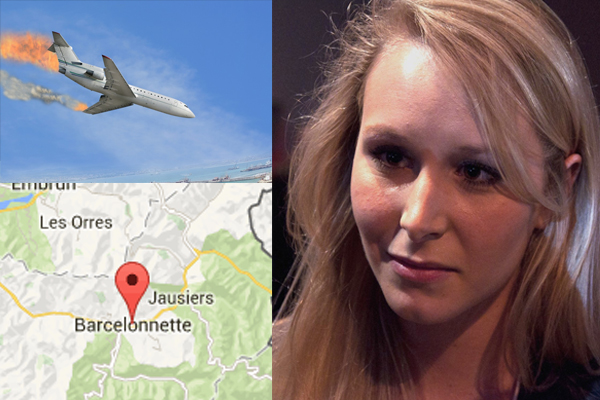 Marion Maréchal-Le Pen, niece of Marine Le Pen (Front National leader), expressed outrage tonight in a TV interview on how many foreigners had come « to crash their plane in France without authorization or residence ».

The statement of Marion Maréchal-Le Pen followed the victory of the National Front in the first round of departmental elections.

Here is her full statement:

After the pain and sympathy, we must return to reality. The reality is that 150 foreigners have illegally visited France and crashed into a French mountain. This is further proof of immigration damage to our heritage and our landscapes. Does Spain will pay for the damage to the mountains? I do not think so. Is it normal to let people fly over our territory without any control? I do not think so. If a muslim plane pass over France and decide to crash on Mont Blanc, what will you say ?. It is time to restore true boundary and prohibit any uncontrolled traffic over France.

She gives birth and shoves her baby into her anus